I guess it was Woody Allen who quipped, "If you want to make God laugh, tell him about your plans."  Woody had a point!  A couple of weeks after writing about my new vocabulary (see prior post) and just a couple of days before my doctor appointment to be released as far as my new knee is concerned, I slipped on a concrete floor at church and landed HARD on the hip I'd had replaced last March.

The pain in my buttocks (pardon the vivid language) is excruciating when I walk.  Up to a couple of days ago, I used a walker to get around.  Now I've tried to graduate to a cane, but progress is slow.  X-rays showed the hip itself was not damaged.  For that I'm immensely thankful.

BUT (no pun intended), my workouts were abruptly halted.  I believe SOME flexibility has returned, and I have learned and incorporated some tricks to make moving easier.


All this to report that I have temporarily suspended any real exercise
and that while I've tried to keep Fast-5 eating plan intact,
I have at times left its confines to sooth my discouragement.
Just keeping it real here!
I look forward to a much healthier and sane New Year personally
and wish the same to anyone who reads this post.
Posted by Rebecca on Wednesday, December 31, 2014 2 comments: Links to this post

RUN when you can.
WALK when you have to.
CRAWL if you must.
Just NEVER GIVE UP!

You could also meet me here...

Our bodies are rightly made but wrongly used.

If I'd known I was going to live this long (100 years), I'd have taken better care of myself. -Ubie Blake

Wonder what other people do to keep motivated? Here are 198 different approaches to healthy eating and weight loss. Check it out!

SOMEday is not a day of the week!

“All I insist on, and nothing else, is that you should show the whole world that you are not afraid. Be silent, if you choose; but when it is necessary, speak — and speak in such a way that people will remember it.”

"Keep away from people who try to belittle your ambitions. Small people always do that, but the really great make you feel that you, too, can become great."

'Defeat is not the worst of failures. Not to have tried is the true failure." (George E. Woodberry)

That Woman is a Success . . .
Found at itsnotaboutfood.blogspot.com

who loves life
and lives it to the fullest;

who has discovered and shared
the strengths and talents
that are uniquely her own;

who puts her best into each task
and leaves each situation
better than she found it;

who seeks and finds
that which is beautiful
in all people and all things;

whose heart is full of love
and warm with compassion;

who has found joy in living
and peace within herself.

To which I add, "who makes God's kingdom and His righteousness her #1 priority"....(rlg)

“Know what you want to do, hold the thought firmly, and do every day what should be done, and every sunset will see you that much nearer the goal."
~ Elbert Hubbard

One of the most satisfying feelings--more satisfying than the temptation itself is when one can say, ’I could have, but I didn’t!’

"Today is life - the only life you are sure of.
Make the most of today.
Get interested in something.
Shake yourself awake.
Develop a hobby.
Let the winds of enthusiasm sweep through you.
Live today with gusto."
Dale Carnegie

"Now if you are going to win any battle, you have to make the mind run the body. NEVER let the body tell the mind what to do. The body will always give up. It is always tired in the morning, noon and night; but the body is never tired if the mind is not tired." ~ George S. Patton

"A day must come in our lives, as definite as the day of our conversion, when we give up all right to ourselves and submit to the absolute Lordship of Jesus Christ. . . . there must be a day when, without reservation, we surrender everything to Him--ourselves, our families, our possessions, our business and our time. All we are and have becomes His, to be held henceforth entirely at His disposal. From that day we are no longer our own masters, but only stewards. Not until the Lordship of Jesus Christ is a settled thing in our hearts can the Holy Spirit really operate effectively in us. He cannot direct our lives effectively until all control of them is committed to Him. If we do not give Him absolute authority in our lives, He can be present, but He cannot be powerful. The power of the Spirit is stayed." (Watchman Nee)

"Until we determine that turning back is not an option we’re destined to slip up." (Read more by Darlene Schacht.)

Beloved, I pray that all may go well with you and that you may be in good health, as it goes well with your soul. 3 John 2 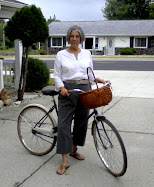 Why change your life tomorrow, when today is such a perfect time? (From Motivation to Live Well)

For the moment all discipline seems painful rather than pleasant, but LATER it yields the peaceful fruit of righteousness to those who have been trained by it. Hebrews 12:11

"Each day you take a few small steps, then build on them day after day. There may be set backs, everyone has them, but those victories will add up, and then pretty soon you'll be amazed at how different your life has become. And what could be more alluring than the prospect of waking up to your best life? So roll up your sleeves and get to work!"

"Remember, every step you take toward reaching your weight loss goal is really a gift that you give to yourself. When you eat right and exercise, you are taking care of yourself, treating yourself with respect, and acknowledging that you deserve* to be healthy and happy.” (Bob Green, The Best Life)

Rebecca's note: I have trouble with "deserve". I want to care for my body because God Himself cares for it! Do I "deserve" health? No, in light of my sinful inclinations and the fall of mankind, health is a gift. A GRACE-gift directly from the hand of God--a gift to be handled thankfully and thoughtfully.

Jules Renard: "Laziness is nothing more than the habit of resting before you get tired."

Seeds of discipline produce a harvest of strength. Keep planting them daily.

"I have learned that as long as you continue to live healthy, eventually you will be healthy!" Less Jess

"It's not what you do once in a while. It's what you do day in and day out that makes a difference." Jenny Craig

LIVE HEALTHY! "Life is like riding a bicycle - in order to keep your balance, you must keep moving." ~Albert Einstein